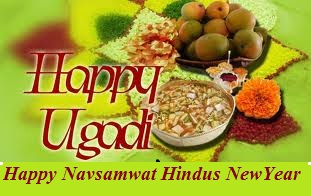 In April, this day marks the beginning of the Hindu solar New Year. In fact, this day is celebrated all over the country as New Year day, under different names. The New Year begins with the first day after the new moon, in the month of Chaitra, Chaitra Shuddha 1 or Chaitra Shukla Paksha Prathama; which usually falls in March-April in the Gregorian calendar. The nine-day Navaratri festival season begins on this day, culminating on Ram Navami day. In Nepal, it begins in mid-April and marks the start of the solar New Year.

The traditional New Year of Bikram Samwat is one of the many festivals of Nepal, marked by parties, family gatherings, the exchange of good wishes and participation in rituals to ensure good fortune in the coming year. It occurs in mid-April each year and coincides with the traditional new year in Assam, Bengal, Maharashtra,Burma, Cambodia, Kerala, Manipur, Orissa, Punjab, Sri Lanka, Tamil Nadu and Thailand.
The day is considered a promising one to begin new ventures. Apart from being celebrated in Karnataka and Andhra Pradesh, Ugadi is also celebrated in many other states of India and goes by different names. For the Sikh community, Baisakhi has a very special meaning. It was on this day that their tenth and last Guru – Guru Gobind Singh – organized the Sikhs into Khalsa or the ‘pure ones’. By doing so, he eliminated the differences of high and low and established that all human beings are equal.

In addition to Nepal, the Bikram Sambat calendar is also recognized in northern India, eastern India, and in Gujarat among Hindus. In Buddhist communities, the month of Baishakh is associated with Vesak, known as Visakah Puja or Buddha Purnima in Nepal, India and Bangladesh, Visakha Bucha in Thailand, Waisak in Indonesia and Wesak in Sri Lanka and Malaysia. It commemorates the birth, Enlightenment and passing of Gautama Buddha on the first full moon day in May, except in a leap year when the festival is held in June. Although this festival is not held on the same day as Pahela Baishakh, the holidays typically fall in the same month (Baishakh) of the Bengali, Hindu, and Theravada Buddhist calendars, and are related historically through the spread of Hinduism and Buddhism in South Asia.

In Gujarat, the next day of Diwali is celebrated as the first day of the Vikram Samvat calendar which is the first day of the month Kartik. In Maharashtra it goes by the name of Gudi Padwa, Sindhis celebrate it on the same day as Cheti Chand, in Punjab it is celebrated as Baisakhi, as Vishu in Kerala, and as Puthandu in Tamil Nadu. Names may be different, but one common thing that connects all the states with this festival is that, it is celebrated with much fanfare, sumptuous feasts, and delightful family gatherings.

Legend–:
Legend has it that it was on this day that the Creator of Hindu Pantheon, Lord Brahma, began his auspicious creation and created the Earth, and set days, nights, dates, weeks, fortnights, months, seasons and years to count the time.
Vikrama Samvat–:
The Vikrama Samvat is said to have been founded by the emperor Vikramaditya of Ujjain following his victory over the Sakas in 56 BCE, although it is popularly (and incorrectly) associated with the subsequent king Chandragupta Vikramaditya. It is a lunar calendar based on ancient Hindu tradition (see Hindu calendar and Vedic time keeping). Abbreviated as V.S. or B.S. is the calendar established by Indian emperor Vikramaditya. The Vikram calendar was commonly used in North India, and is still used. It uses lunar months and solar sidereal year. It, the official calendar of Nepal, is also termed Bikram Sambat, but is computed using the tropical year. In India, the reformulated Saka Calendar is officially used, although in the Hindi version of Preamble of The Constitution of India, the date of adoption of constitution 26 Nov 1949 is presented in Vikram Samvat (Margsheersh Shukla Saptami Samvat 2006 ). There have been calls for Vikram Samvat to replace Saka as India’s official calendar.
They discontinued Shaka Sambat in its 1823rd year, and replaced it with Vikram Samwat for official use since then to date. The Ujjain calendar started around 56 BCE to 58 BCE, and the subsequent Shalivahan Saka calendar was started in 78 AD at Pratishthan.The calendar is widely in use in western India, where it is known as the Vikram Samvat.
Kalakacharya and the Saka King (Kalakacharya Katha-Manuscript,Prince of Wales Museum, Mumbai
Ugadi–:
Ugadi, also known as Yugadi, is a Hindu festival celebrated by the people of Karnataka and Andhra Pradesh with much vigor. Yug means new era and Adi means beginning; together it means beginning of a new era. In other words, it also means the beginning of a new astronomical cycle. The festival falls in the spring season and marks the first day of the New Year, which is the first day of Chaitra (March or April), the first month of the traditional Hindu calendar. But since the Hindu calendar is a lunisolar calendar, Ugadi falls on different dates every year and is also one of the most important festivals of the Hindus.

Preparation for Ugadi begins a day or two before the actual date with people washing and cleaning their houses; buying new clothes is also one of the many traditions. On the day of Ugadi, people, especially of Karnataka and Andhra Pradesh, take an extensive ritualistic shower or oil bath followed by partaking in prayers for good health and prosperity in the coming year. Then as the day moves on, people decorate their houses with mango leaves and rangolis, and Ugadi Pachhadi (Telegu) or Bevu Bella (Kannada), a unique dish of a specific mixture with six different tastes is also prepared. The dish symbolizes different experiences ranging from sweet to bitter and that everyone should learn from these experiences and continue with life’s journey.

Later in the day, the event of Panchanga Sravanam is organized in many temples and cultural and religious gatherings are held, whereby predictions for the coming year are made.
Children wear garlands of flowers and run through the streets singing “May the new year come again and again!” In Kerala, the festival is called ‘Vishu’. It includes fireworks, shopping for new clothes and interesting displays called ‘Vishu Kani’. These are arrangements of flowers, grains, fruits, cloth, gold, and money are viewed early in the morning, to ensure a year of prosperity. In Assam, the festival is called Bohag Bihu, and the community organizes massive feasts, music and dancing.
As the youth of India celebrate the New Year according to the English calendar, the Hindu New Year is forgotten. As the history of our country is so rich shouldn’t we celebrate the New Year according to the Hindu calendar?The reasons for this lie deep, in the origin of Hinduism as an organic religion. Its followers have over time considered anything, animate or inanimate, to be sacred and aspects of divinity.Shubh Vikram Samvat and Ugadi to all of you.