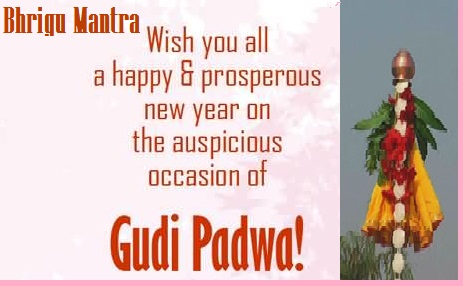 In March – April, this day marks the beginning of the Hindu solar New Year. In fact, this day is celebrated all over the country as New Year day, under different names. The New Year begins with the first day after the new moon, in the month of Chaitra, Chaitra Shuddha 1 or Chaitra Shukla Paksha Prathama; which usually falls in March-April in the Gregorian calendar. The nine-day Navaratri festival season begins on this day, culminating on Ram Navami day. In Nepal, it begins in mid-April and marks the start of the solar New Year.This auspicious day Pratipada (Padwa) also heralds the season of spring (Vasant Ritu). Gudi Padwa or Gudhi Padwa is the New Year celebrated by Maharashtrians in India and it falls close to New Year of other Hindu communities like the people from Karnataka who celebrate the Ugadi New Year. Gudi Padwa is the New Year celebration for the people of Maharashtra. This festival is celebrated with great enthusiasm over the whole of Konkan coast area. The treatise on health of the Aryans viz. Ayurveda prescribes taking dhania, neem leaves and jiggery during this season for optimum health. In Shalivahaan calendar, this day is called “Shalivahaan-Shaka” since legend has it that on this day King Shaliva vanquished the Shakas after a prolonged battle of good over evil.

Traditional Hindu families decorate the entrance to their homes with symbols by way of rangolis on the floor and garlands of flowers (toran) on the doorway. These torans have flowers intercepted with mango-leaves. The main attraction in every home is the Gudi which is a long clean bamboo-stick which has to be longer than the roof. It is tied on its upper end with a silk cloth and a silver pot.

Then it is decorated with floral garlands, haldi and kumkum (all auspicious symbols) and kept in front of the house since it welcomes the entire pantheon of Gods and Goddesses into the house. Indian culture is supposed to treat visitors as Gods (Atithi Devo Bhava), this Gudi makes a welcoming metaphor for the guests who may visit the home on this day. In fact, there is also a mini-ceremony, a sort of auspicious ritual to make visitors feel welcome which is called Aththi Yagna.

It is the head of family who erects the Gudi-stick. This is followed by a puja of this stick, usually done by the wife. The ritualistic practice by the elder couple of the household signifies an invitation to all the Celestial-couples among the pantheon of Deities to come to Earth and visit their home and shower their blessings on each and every member of the family.
Legend–: Legend has it that it was on this day that the Creator of Hindu Pantheon, Lord Brahma, began his auspicious creation and created the Earth, and set days, nights, dates, weeks, fortnights, months, seasons and years to count the time.
Hindus follow two calendars viz. the Shalivahaan and the Vedic. While most Hindus go by the Shalivahaan, the Arya Samaj Hindus follow the Vedic calendar. According to Vedic literature, Gudi Padwa is celebrated to commemorate the birth of man in the first month of the year which is Chaitra. It seems that God created man on this day and hence, there is a religious significance to the festivities.
Vikrama Samvat–:
The Vikrama Samvat is said to have been founded by the emperor Vikramaditya of Ujjain following his victory over the Sakas in 56 BCE, although it is popularly (and incorrectly) associated with the subsequent king Chandragupta Vikramaditya. It is a lunar calendar based on ancient Hindu tradition (see Hindu calendar and Vedic time keeping). Abbreviated as V.S. or B.S. is the calendar established by Indian emperor Vikramaditya. The Vikram calendar was commonly used in North India, and is still used. It uses lunar months and solar sidereal year. It, the official calendar of Nepal, is also termed Bikram Sambat, but is computed using the tropical year. In India, the reformulated Saka Calendar is officially used, although in the Hindi version of Preamble of The Constitution of India, the date of adoption of constitution 26 Nov 1949 is presented in Vikram Samvat (Margsheersh Shukla Saptami Samvat 2006). There have been calls for Vikram Samvat to replace Saka as India’s official calendar.
They discontinued Shaka Sambat in its 1823rd year, and replaced it with Vikram Samwat for official use since then to date. The Ujjain calendar started around 56 BCE to 58 BCE, and the subsequent Shalivahan Saka calendar was started in 78 AD at Pratishthan.The calendar is widely in use in western India, where it is known as the Vikram Samvat.
Kalakacharya and the Saka King (Kalakacharya Katha-Manuscript,Prince of Wales Museum, Mumbai

There are many legends and stories associated with Gudi Padwa. Some believe that Lord Brahma started the process of creation on the auspicious day of Gudi Padwa. Some other legends also state that King Bali was defeated by Lord Ram on this day. Whatever is the story behind it, Gudi Padwa is a time of celebration. People wear new clothes and start new ventures on this day. People wear new clothes and pray for the well-being of their family. The festival ushers in the refreshing season of spring and marks the onset of harvesting season.
Since symbolism plays a big role in the Hindu religion, the symbols of the bamboo-stick, silk-cloth, flowers, torans and rangoli complete the celebrations on this auspicious day which is also a day of spiritual-sadhana and connecting to one’s inner-self so that one may ultimately connect to the Supreme Reality. Gudi Padwa is celebrated on a bigger scale in rural areas perhaps because of open spaces outside homes. City-homes are often cramped and congested and hence, lots of compromises need to be made like smaller bamboos, tiny silver pot (and garlands) and making of gudi on balconies of flats.

As the youth of India celebrate the New Year according to the English calendar, the Hindu New Year is forgotten. As the history of our country is so rich shouldn’t we celebrate the New Year according to the Hindu calendar? The reasons for this lie deep, in the origin of Hinduism as an organic religion. Its followers have over time considered anything, animate or inanimate, to be sacred and aspects of divinity.
Shubh Vikram Samvat , Ugadi and Gudi Padwa to all of you.