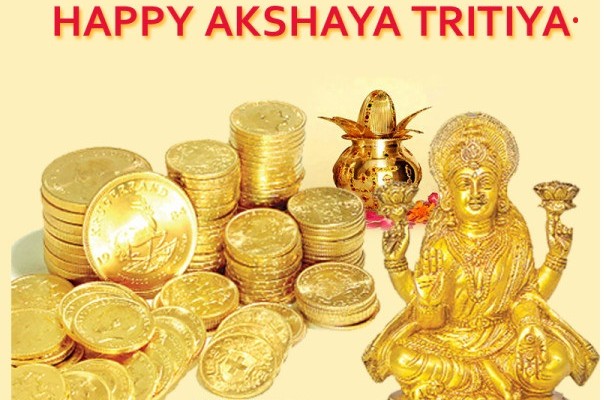 • The day also marks the birth anniversary ‘Lord Parasurama’, who is the sixth incarnation of Lord Vishnu. The Puranic scriptures speak about how he reclaimed the land from the sea.

• In Hinduism, Akshay Tritiya was the day when Vyasa started writing the history of the great Bharat war in the form of an epic Mahabharata.

• The most sacred river of India, descended to the earth from the heaven.

• It was on this day that Goddess Annapurna Devi was born.

• It is on this day that poor Sudama, the best friend of Krishna visits Him (Lord Krishna) to greet Him after He became the King. With nothing to offer, Sudama takes with him Poha (puffed rice) and offers it to his friend and never discusses his poverty though he intends to. On his return he finds his hut changed to a palace.

• Kubera received his wealth and position as custodian of wealth and property with Goddess Lakshmi on this day, by praying to Lord Shiva at Shivapuram.

• In more recent history, Adi Shankara recited the Kanaka Dhara Stotr on this day for the sake of the poor couple at whose house he stopped for Bhiksha and was offered their only available gooseberry.

Akshaya Tritiya is considered as the most golden day of the year because the word Akshaya means the most “Eternal” that which never diminishes. Any initiative made on that day or anything bought on that day is considered to be good fortune. The most popular activity is the buying of gold and it is believed it will be a sign of good fortune for the buyer. Most people purchase Gold on this day as it is believed that buying Gold on Akshaya Tritiya brings prosperity and more wealth in coming future. Being Akshaya day it is believed that Gold, bought on this day, will never diminish and would continue to grow or appreciate. In the Indian culture people typically starts a new business or begins a new venture on Akshaya Tritiya. This is also one of the most popular days for weddings to take plans as the spirit of this day bids them on a very long and fulfilling life journey. It was also believed that people born in that month will be very lucky and will shine bright throughout their life. This day is generally observed by fasting and worship of Lord Vasudeva with rice grains. A dip in the river Ganges on this day is considered to be very auspicious. Fasts are kept on this day and pujas are performed. In charity, fan, rice, salt, ghee, sugar, vegetables, tamarind, fruit, clothes, are given. The god Vishnu is worshiped. Tulsi water is sprinkled in the nearby area of the idol while performing aarti. When anyone makes donation for food to poor on this day, the divine Mother Annapurna gives her blessings.
Followers of Jainism consider Akshaya Tritiiya to be a holy and supremely auspicious day. It is associated with Lord Adinatha, also known as Rishabhadeva, first of the twenty-four Tirthankaras. On this day people who observe the year-long alternative day fasting known as Varshi-tap finish their Tapasya by doing parana by drinking sugarcane juice.
Akshaya Tritiya is believed to bring good luck and success.

“May this day of Akshaya Tritiya
Bring you good luck and prosperity
That never diminishes.”