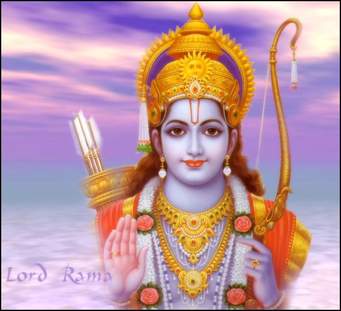 Ram Navami is a religious and traditional festival, celebrated every year with great enthusiasm by the people of Hindu religion. The festival of Ram Navami is celebrated as the birthday of the Hindu God Rama, who is believed to be one of the incarnations of Lord Vishnu. Hindu religion believes that Rama was born to destroy the signs of evil from the earth and to eliminate negativity from life. Lord Vishnu made promise to protect the deities of the Heaven from the tyranny of Ravana, the demon. The Lord kept his promise in the form of a human being namely Rama. Later, people’s devotion towards Rama transformed him into a deity and since then he became known as Lord Rama.
As per the Hindu religion, Rama is the symbol of the perfect man or Lord of Self Control or Lord of Virtue. Lord Rama truly represents the virtues like sacrifice, indomitable courage, honesty and strength. He executed the murder of Ravana without losing his cool even in most difficult situations that he faced during the course of the time.
According to the Hindu calendar, it falls on the ninth day of the Chaitra month, which is the spring season. Though Ram Navami is a major festival which celebrates birth of Lord Rama .Hindu people celebrates it as a 9 days festival by organizing the Akhand Paath of the Ramacharitamanas, religious bhajan, havan, ritual kirtan and distribution of Prasad after the puja and Aarti at 9th day. Devotees make the statue of the Lord Rama in infant form and make prayer in front of the God. It is considered auspicious to undertake a fast on the day of Ram Navami, in the name of Rama. The objective of the fast is not to ask for special favors of the deity, but to seek perfection as a human being. Devotees perform elaborate pujas and chant the name of Rama for whole day. Temples of Rama are specially decorated and satsangs and bhajan sessions are organized in most of the temples, through the day. Discourse on the Ramayana, are recited by a pundit or a professional story-teller on this day. At some places of India, it usually lasts nine days, beginning on Ugadi and ending on Rama Navami. Thus, people of India celebrate Ram Navami with great joy and devotion. Sacred places associated with Rama, like Ayodhya, Ujjain and Rameshwaram, draw thousands of devotees on this festival of Ram Navami. In Rameshwaram, people take a ritual bath in the sea before worshipping at the Ramanathaswamy temple. Many places in North India host fairs in connection with the festival, culminating in spectacular fireworks on Rama Navami. During Rama Navami Hanuman is worshipped for his unflinching devotion to Rama and his worship forms an important part of the Rama Navami celebrations.
As we celebrate this holiday, as we revel in Bhagwan Rama’s birth, let us ask ourselve ;When one is under the sway of the ahamkaras, the power of discrimination between right and wrong is destroyed. Consequently the Lord’s light has to descend on him to destroy these ahamkaras.