“Not a grave for the murdered for freedom, but grow seeds for freedom, in its turn to bear seeds which the wind carry a far and resow, and the rains and the snows nourish. Not a disembodies spirit can the weapons of tyrant let loose .But it stalc invincible over the earth whispering counseling, cautioning. – (Walt Whit men) One is the most heroic figures of the Indian freedom movement. Few people remembered it, though. Forget the rest of India, even the children of the village where he was born, do not know anything about him.And to think that the young man in question, Bhagat Singh, gave up his life for the ideal of a free and better India! Today, over 65 years after Independence, the people of his village still do not have access to drinking water and a tap, writes The Indian Express newspaper. Bhagat Singh was born on September 27, 1907, in Khatkar Kalan, Punjab. His grandfather Arjan Singh, father Kishan Singh and Uncle Ajit Singh, were all active in the freedom struggle. Bhagat Singh’s father Kishan Singh and uncle Ajit Singh were members of Ghadar Party founded in the U.S. in early years of this century to route British rule in India. Both were jailed for alleged anti-British activities. 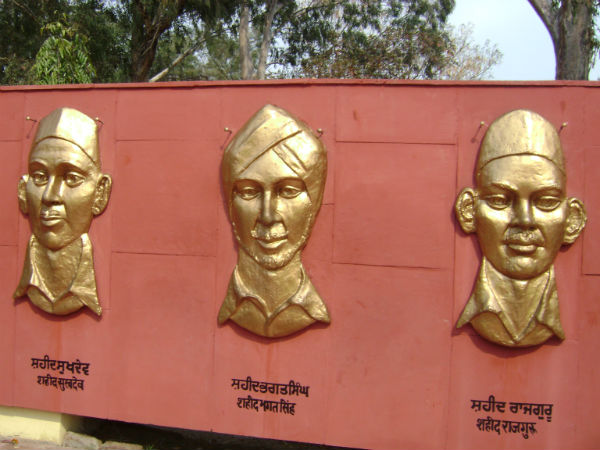 While studying at the local D.A.V. School in Lahore, in 1916, young Bhagat Singh came into contact with some well-known political leaders like Lala Lajpat Rai and Ras Bihari Bose.

Their ideas differed from the Gandhian idea of a freedom movement based on non-violence or ahimsa. Gandhi’s ideas went on to become more prominent as the Indian freedom movement progressed.

But it is not merely as a bold militant-type figure that Bhagat Singh is remembered today.

Bhagat Singh and Batukeshwar Dutt would court arrest after throwing the bomb. It was a forgone conclusion in 1929 April 8th at Delhi Central Assembly. Bhagat Singh and Dutt threw handouts, and bombed in the corridor not to cause injury and courted arrest after shouting slogans Inquilab Zindabad (Long Live, Revolution!)

“If the deaf are to hear, the sound has to be very loud. When we dropped the bomb, it was not our intention to kill anybody. We have bombed the British Government. The British must quit India and make her free.”    – Quote by Bhagat Singh

While in jail, Bhagat Singh found that the authorities were following a dual policy in treating the prisoners. The criminals of foreign origin were treated better than Indian political prisoners. As a protest, he along with some fellow prisoners declared to “go on hunger strike”. The strike continued for over a month and finally the British had to accept before their conditions. Bhagat Singh, a great reader and thinker was able to break the jail conditions, even when officially not allowed he was reading and writing but finally after long hunger strike got the right of reading & writing included in Jail Manuals Thus he maintained a note book of 404 pages and kept notes & quotes from the books he read.

Bhagat Singh wanted to be shot like a soldier, and not die at the gallows. But, his plea was rejected, and he was hanged on the 23rd of March 1931. He was 24. Bhagat Singh became a legendary hero for the masses. Innumerable songs were composed about him, and the youth throughout the country made him their ideal. He became a symbol of bravery and a goal to free India.

Bhagat Singh along with other revolutionaries found responsible for the Assembly bombing and murder of Saunders. On March 23, 1931, Bhagat Singh was hanged in Lahore with his fellow comrades Rajguru and Sukhdev. Singh was cremated at Hussainiwala on banks of Sutlej River.