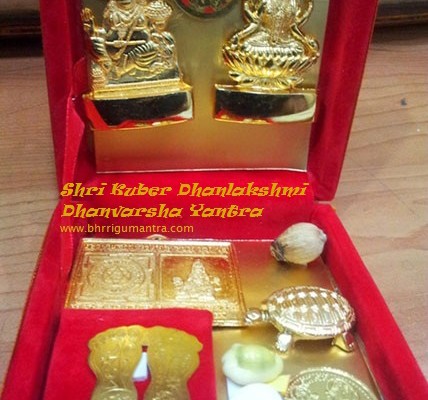 Dhantrayodashi which is also known as Dhanteras is the first day of five days long Diwali festivities. On the day of Dhantrayodashi, Goddess Lakshmi came out of the ocean during the churning of the Milky Sea. Hence, Goddess Lakshmi, along with Lord Kubera who is the God of wealth, is worshipped on the auspicious day of Trayodashi. However, Lakshmi Puja on Amavasya after two days of Dhantrayodashi is considered more significant. Devotees perform Kubera Lakshmi Puja and buy gold on this day.

Lord Kubera is the ‘treasurer of the gods’ and ‘king of Yaksha’. He is a true representation of wealth, prosperity and glory. Lord Kubera not only distributes, but also maintains and guards all the treasures of this universe. Hence, he is also known as guardian of wealth.  Some texts also illustrate Lord Kubera holding a mace, a pomegranate or a money bag in his hand. Mongoose is often associated with him whereas a few texts also connect him to the elephant.

Lakshmi Puja on Dhanteras or Dhantrayodashi should be done during Pradosh Kaal which starts after sunset and approximately lasts for 2 hours and 24 minutes. The best time for Lakshmi Puja on Dhanteras is during Pradosh Kaal when Sthir Lagna prevails. If Dhanteras Puja is done during Sthir Lagna, Lakshmiji will stay in your home; hence this time is the best for Dhanteras Pujan. Vrishabha Lagna is considered as Sthir and mostly overlaps with Pradosh Kaal during Diwali festivity. Dhanteras Puja is also known as Dhantrayodashi. The day of Dhanteras is also observed as Dhanwantari Triodasi or Dhanvantri Jayanti, the birth anniversary of the God of Ayurveda.

Say after the end of recitation, “O Lord Dhanwantari! I offer this recitation in your lotus feet. Please give us good health or Lord kuber to give us wealth.”

Yamadeep is another ritual on the same Trayodashi Tithi when the lamp for the God of death is lit outside home to ward off any untimely death of any family members. Light the earthen lamp. Put 1 rupee coin in it, offer some flowers to lamp. Do pranam to earthen lamp. Now place this lamp outside main gate of your house. Place it on right side of door. Its flame must face towards south direction.