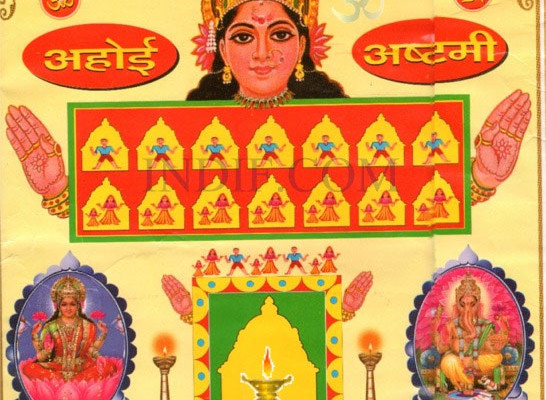 Ahoi Ashtami or Ahoi athen/ Ahoee / Hoee / Hoi as known in common tongue festival is specifically meant for mothers who have son.This is celebrated in the month of October – November during the dark fortnight (Krishna Paksha) of Kartik month.Similar to Karwa Chauth, Ahoi Ashtami is performed mostly by people living in the North of India.This day is also known as Ahoi Aathe because fasting for Ahoi Ashtami is done during Ashtami Tithi which is the eighth day of the month. Similar to Karwa Chauth, Ahoi Ashtami is a strict fasting day and most women abstain even from water throughout the day. On Ahoi Ashtami mothers hold a fast from dawn to dusk for the long life and well-being of their sons. Mothers fast all day and offer prayers to Ahoi Mata. They wake up before sunrise, have some refreshments and proceed to the temple to offer prayers for their children. The fast ends in the evening when the moon appears. Some families also break their fast once they see the stars in the sky.

The Banya-Marwari (traders) community in Rajasthan has held on to this tradition quite religiously over centuries. In the age of ‘readymade’ items though quite a few Marwari households which buy a ready-made Ahoi Mata calendar, there are still those who retain the age-old tradition of making the Mother’s sketch with the help of geru (red powder) diluted with water to make a paste. Her picture is either hung (if it is a calendar) or made on the wall.

Once upon a time, there lived a woman in a village. She had seven sons. One day she went to the forest to bring soil for the renovation and painting of her home (this was in the month of kartik just before the Hindu festival Deepawali). She started digging soil with axe nearby a den. Suddenly the woman’s axe fell on the cub in the den and the cub died. The woman felt very sorry and sympathetic. She took soil from the forest and came back.

Few days later, all her seven sons died within a year. She was very sad. One day she narrated her woes to old ladies in her village, she was crying and told them that she didn’t commit the sin and it happened unintentionally. She narrated to the ladies that once when she was digging for the soil in the forest her axe fell on the cub and thereafter within a year all my seven sons died. The ladies appreciated for confessing her guilt and then these ladies told that by confessing the sin she has atoned her half of the sin.

They suggested the woman to pray the goddess Ashtami Bhagwati by sketching the face of the cub. By the grace of god your sin will cast off. The woman kept fast on the Kartik Krishna Ashtami and then onwards she started praying and keeping fast regularly. By the power of her prayer the God’s grace showered and she could get back her all seven son. Since then, it became a ritual to worship the goddess Ahoi Ashtami Bhagwati religiously every year.
Women finish the story saying, “O Hoi mata, look after my children, as you looked after hers”.

The fasting is from morning to sighting of moon or stars in the night sky. Mothers wake up before sunrise, and have some refreshment. Then proceed to the temple to offer prayers for their children.
After the morning prayers, mothers do their normal work. Most women in the neighborhood gather for the puja in the afternoon or an hour or so before sunset for the Ahoi Puja.

A painting of Ahoi mata is made on the wall or a picture or idol is placed in the Puja room.
Water in a pitcher or bowl or jug is placed on the left of the picture of Ahoi mata.An untwisted red colored thread is wrapped around the bowl of water and the edges are smeared with turmeric and kumkum powder. Locally available Grains are placed on a tray or plate and are kept in front of the picture of Ahoi mata.Prasad or food offerings that are made are also placed in front of the idol. The Prasad made include pooris, halwa, sweets, boiled channa or jowar. Some people also place the money intended to be distributed before the photo of Ahoi Mata. The money is given to children or the poor after the puja.

There is also an important tradition of making garland using coins or currency notes by some families. Some people make garland using something very unique that is found in the region or something that is important to the family. Some families also have the tradition of making a garland with silver coins or small silver balls. They keep adding to this garland when a child is born in the family or a son gets married. Every year the Ahoi Mata picture is adorned with this garland and this tradition is passed on to future generations. Some people make a new garland each year; others make a new garland if something highly auspicious happened in the family during the year.